Anyone who has been into electric scooters for some time has almost certainly heard of Segway before. They may very well be the most popular manufacturer of electric scooters, electric segways and electric unicycles in the world.

While Segway makes a wide variety of very high-quality products, they probably came to dominance thanks to their flagship model, the Ninebot ES2 and ES4 Scooter. We’re happy and excited to say that we just got our hands on Segway’s newest kickscooter model designed to succeed both the ES2 and the ES4: the Ninebot Max scooter. 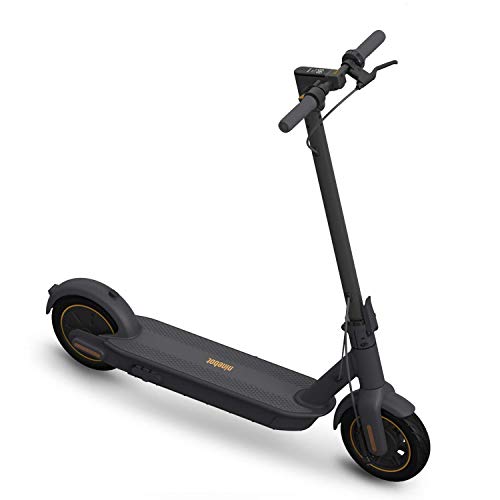 Judging by the name and the specs alone, Segway probably intends the the Ninebot Max to be their ultimate kickscooter thus far. As pumped as we were to get our hands on the Ninebot Max, we felt obligated to put it to the test.

Is it really the godsend scooter that Segway has promised? Can the Ninebot Max outshine the wonderful reputation of the ES2 or the ES4? Dive into our Ninebot Max electric scooter review to find out.

While both the ES2 and the ES4 scooters looked very similar to one another, there is no denying that the Ninebot Max has several differences. These are more than mere cosmetic elements, however. They hint at the very structural differences that separate the Ninebot Max from previous Segway scooters. 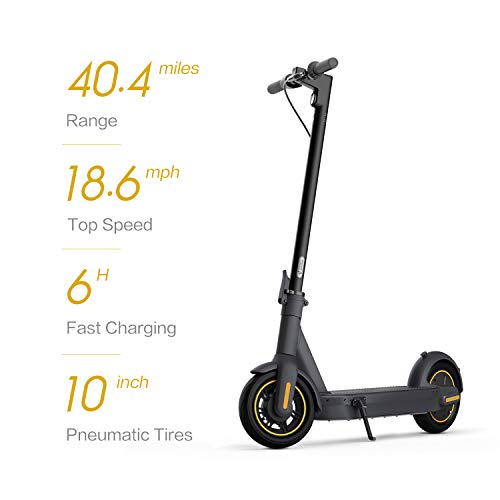 I’m going to spend a bit of time comparing the Ninebot Max to both of its predecessors, not only because I think that many people are curious how they compare, but also because the Ninebot Max is still a part of the same family, despite the different name.

The Ninebot Max is the newest evolution of Segway’s line of electric kickscooters, so having this evolution laid out will be necessary for properly understanding how much of an improvement has been made.

Let’s start with what these electric kick scooters have in common. For one thing, the Ninebot Max still has a portable design, despite having a thicker frame overall. The scooter still has a foldable design much like the ES2 and ES4.

Another commonality is the top speed. While the ES2 could go up to 15.5 mph, both the ES4 and the Ninebot Max can go up to 18.6 mph. However, the Ninebot Max undeniably smokes both of its predecessors with an incredible top range of 40.4 miles, making it by far the best long-range electric scooter they’ve ever made. 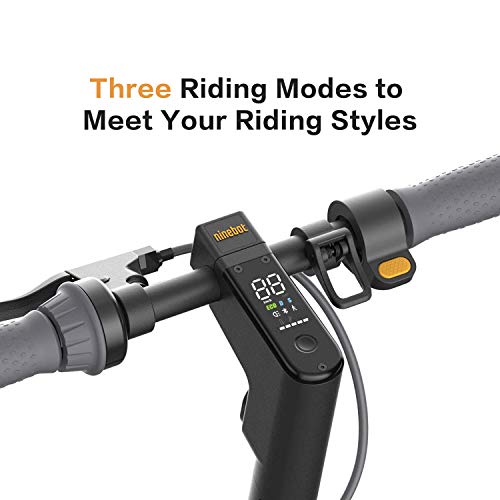 To sum all of this up, the Ninebot Max seems to be Segway’s most powerful and durable electric scooter yet. Even when compared to the mighty ES2 and ES4, the Max seems to be superior in nearly every category. So since this scooter looks like a gem on paper, let’s find out how good it really is when in action.

There is no denying that the Ninebot Max is a new kind of scooter. This is what kept on going through my head when I first unboxed it, as it doesn’t just look different but it feels different too.

The ES4, while it is undeniably a great scooter, was a slightly better version of the ES2. Both of those scooters were practically identical when it came to build quality and other technical specs. The Ninebot Max however truly feels like a new kind of scooter.

For one thing, the Ninebot Max weighs 40 pounds, making it noticeably heavier than the ES2 and ES4 which weighed 27 pounds and 30 pounds respectively. This extra weight can be explained by just a couple of new design choices.

The footboard on the Max is quite a bit wider and thicker than on other Segway scooters. This was probably the first thing I noticed about this new scooter. It is now far easier to rest both feet on the deck. This extra spaciousness makes the Max feel much more comfortable and even a little luxurious. The foot deck also has a really nice anti-slip surface thanks to the gripping on the deck.

The tires are definitely larger, though that may be a little hard to see through online pictures. Trust me though, these extra two inches really make a difference in person. Not only are these wheels taller but they are thicker as well. They feel much tougher than the ES2 or ES4 wheels and that gave me a lot of confidence in their ability to handle bumpy trails.

When it comes to the scooter’s stand, the Max seems nearly identical to its predecessors. The LED screen is bigger and looks nicer on the Max and the handlebars have better gripping in place, but otherwise, the folding stand seems more or less the same.

In short, the build quality of the Ninebot Max is excellent. The foot deck and the tires are thicker and tougher than they’ve ever been.

I admit that despite being impressed by the technical specs, I wasn’t sure if the Max would end up being that much smoother of a ride than the ES2 or ES4. I am glad to write to you today to tell you that I was wrong. 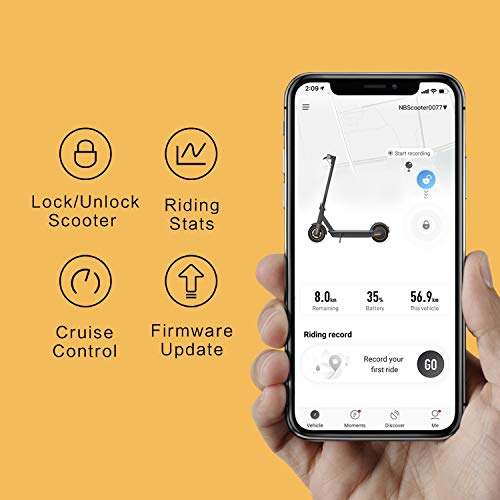 To start off, the larger foot deck really makes a difference. I soon realized while riding around on the Max that I was spending even less of my mental focus on balancing because my feet were more firmly planted on the board. The Max made me realize just how thin other electric scooters’ foot decks are – too thin, in fact, because I don’t think I would want to go back after riding this.

After getting used to riding on some flat terrain I decided to test out the Ninebot Max on some bumpy dirt trails. I was curious about these new tires and wanted to see how they would handle something besides a sidewalk. Fortunately, the Max handles bumpy roads very well.

While the ES2 and ES4 had good shock absorption, it is even better with the Ninebot Max. You can still tell when you’re hitting a bump in the road but these large tires reduce the impact by a considerable amount. While I’m sure many people will buy this scooter primarily for commuting in urban areas, you can definitely use this scooter primarily for off-road trails as well.

Steering seems to be better on these off-road trails as well. It didn’t really seem to matter whether I was going in a straight line or turning a fairly sharp corner – the Ninebot Max always felt firm and stabilized.

The improved incline climbing rate is also noticeable here as well. The extra five degrees don’t really give you that many extra places to ride up, but it’s still a nice little improvement and I welcomed it during a few high-ground trails.

The braking system of the Max seems identical to previous Segway scooters as far as I can tell. It still has a very reliable dual-braking mechanism that provides great stability, and it’s still fast-acting.

Some people may feel disappointed that Segway didn’t upgrade the brakes along with the tires or the battery, but honestly, I have no quarrels with this. If it ain’t broke don’t fix it, right? 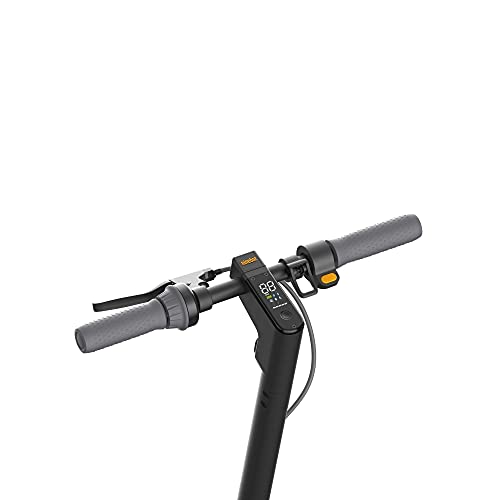 Perhaps the biggest selling point of the Ninebot Max is its battery and range, and I can honestly see why. While it has the same top speed as the ES4, the Max destroys it when range and lifespan are concerned.

The very fact that you can get over two whole hours of use while constantly going at top speed with the Max is just incredible. Even writing out that fact still makes my mind boggle. While part of me wishes that Segway did make the max speed a little higher, 18.6 mph is nothing to scoff at when it comes to scooters.

Believe me, when you are going at top speed on this scooter for over half an hour and you still have 70% of your battery life left, it gives you an amazing feeling of satisfaction that is very hard to find with other electric scooters.

While the top speed isn’t improved, acceleration certainly is. I was worried that the extra 10 pounds the Max has would impact this but somehow Segway found a way to make the Ninebot Max has better acceleration than even the ES4. Going from zero to max speed is even faster with the Ninebot Max. This is true even when climbing slopes. So while the Max can’t go any faster than the ES4, that definitely doesn’t mean it isn’t more powerful.

The Battery is Very Powerful and Charges Fast

Let’s not forget about the battery of the Max, because it is just great. Not only is the 40-mile range an amazing feat in and of itself, but it only takes six hours for the Max to fully charge. Let me put this in perspective – the ES4 can be used for 28 miles, and it needs seven hours to charge.

The Ninebot Max can be used for 40 miles and only needs six hours to charge. In other words, Max’s battery is a whopping 60% stronger. This may very well be the best feature of the Ninebot Max. 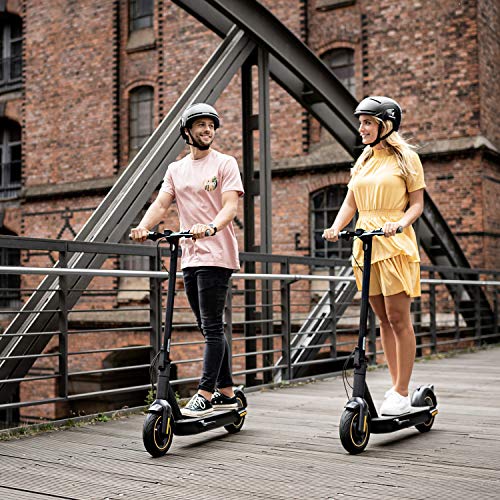 Segway’s products are known for having extremely neat secondary features. While the Ninebot Max doesn’t have too many extra things going on, it has a one really neat aspect that needs to be mentioned: the self-healing tires.

Let me explain. While Max’s tires are very tough, they still aren’t invincible. Luckily though, Segway has a plan B in case you ever happen to pierce your wheels while riding on rough terrain.

Both of Max’s tires have a healing sealant on the inside. This sealant will automatically be applied to fill up any punctures you may have caused by riding over glass shards or nails, filling up holes as large as 6mm in diameter.

While I didn’t test out this feature myself (because I didn’t want to accidentally damage my Ninebot Max too much), this is certainly the kind of innovation that Segway is known for. They’re often coming up with new and interesting ideas like this, so it is great to see them continuing to push the boundaries of what an electric scooter or segway can do.

Many of you are probably waiting for me to answer the question “Is the Ninebot Max better than the ES4 and ES2?” and my honest answer is a resounding YES. While the ES4 felt like a decent upgrade to the ES2, the Ninebot Max really is an all-new kind of scooter.

Not only is the max range and battery life astonishing but the structural changes to the tires and foot deck breathe new life into Segway’s line-up of electric kickscooters.

This scooter may not completely reinvent the wheel but it does excel at all of the core things that make a great electric kickscooter. If you want to get Segway’s ultimate scooter then the Ninebot Max will be the only thing to satisfy you. I adored the Max and I’m sure anyone who gets it will fall in love with it too.

Last update on 2022-01-22 at 16:15 / Affiliate links / Images from Amazon Product Advertising API. As an Amazon Associate I earn from qualifying purchases.

Segway miniPLUS Review – A Replacement to the miniPRO?